The best Broadway Stage Manager April Fools joke! I was told this story many years ago and it’s still the best stage management April Fools I’ve ever heard. This was way back in the 1990s during the Broadway run of The Who’s Tommy.

The back story goes like this… The cast was notoriously late for places all the time and it was becoming a problem starting the show on time. So the stage managers needed to find a way to impress upon the cast that they needed to get to places on time. 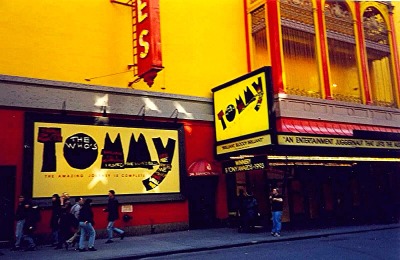 Well, April 1st was approaching. Not sure who had the initial idea, but the stage managers devised a plan.

Working with the sound department, they made a recording of the overture.  If you know The Who’s Tommy, you know the opening is like being shot out of a cannon, in typical Des McAnuff style, the show starts fast and furiously.

So… on April 1st, just a couple of minutes after making the fifteen minute call, the stage managers blasted the recorded overture over the backstage page system. The cast came running to the stage, as they were of course, not ready. They were in various states of dress and trying to put on jackets, shoes and more on their way to the stage to make their first entrance.

Upon arriving at the stage, the entire stage management team was waiting for them on stage! “April Fools” they shouted, as the company arrived expecting the show to have already started.

The company went back to their dressing rooms, finished getting dressed and then began the show as usual.  No surprise, the cast was much more punctual for places from that day forward!

Finding ways to give notes and keep up company morale are important to stage management and if you can do that with a sense of humor, all the better. Enjoy!

Stage Managers: How To Deal With Stress

The Misconceptions & Myths of Stage Management

The mission of the Broadway Stage Management Symposium is to create a safe and welcome place for stage managers to connect, share, learn and inspire. Each year, our annual event brings together the most experienced and highly-regarded Stage Management professionals on Broadway for a two-day program that offers practical insights, instruction, and inspiration for anyone interested in stage management. Through a variety of panels, Broadway’s stage managers share their experience, techniques, offer practical career advice, and answer questions. These sessions dive deep into important issues for stage managers of all levels, revealing insights into the why’s and how’s of stage management, that only come with the benefits of decades on Broadway. This unique forum presents opportunities to engage with top professionals as well as network with fellow attendees, exponentially growing professional relationships and opportunities. Past attendees have come from all over the U.S., as well as Argentina, Bolivia, Canada, Mexico, and Australia and some alumni have gone on to work on Broadway shows. By sharing their knowledge, Broadway stage managers give a hand up to the next generation, illuminate proven strategies for success, and advance the profession. As the leaders of a company, stage managers’ actions have a significant impact on a show and its participants. The Symposium helps stage managers develop the tools for successful leadership and stewardship. In this way, the Symposium can have a positive impact not only on stage managers’ career, but the industry at large. Please join us for our annual event and the ongoing conversation all year long over our social media platforms (twitter, Instagram, facebook & tumblr) as well as the Symposium blog.

Where Are The Crew? Great Excuses For Not Showing Up

Noble Call: Meryl Streep &The Right To An Opinion

Oh The Glamour! Life Of A Wardrobe Assistant

Backstage Stories: When It All Goes Wrong.

Crowd Sourced Wedding, Part 1: Where And How?

An Artistic Life: I Am Not My Father’s Son